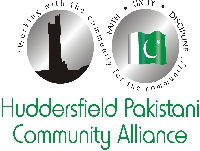 Five young females from the HPCA youth programme visited the Army Medical Services programme at York.  The young people then had the opportunity to perform Firt Aid skills they learnt live infront of Prince Charles.

Prince Charles, the Field Marshall of the Army, learned about the ongoing work between the Army and ethnic minority communities.

The Prince of Wales visited St phillip's Church in Evington, to hear about the Army's programme to strengthen its relationship with minority and faith groups in Leicester and rest of the country.